For this second week of the #52Ancestors  challenge: best find? I decided to revive an old article already written  in French here. I have made many discoveries in the thirty years that I consult the archives. This one is close to my heart, because the sinking of the Titanic and its too many victims have awakened in me an enormous sadness. Go find out why!!

Here is the (automatic) translation of this research and the resulting discoveries.

While browsing the photos of the cemetery of Blois ville, I found that of the Villevarlange-Monberger family. Nothing differentiates it from the tombs of the same period, except this word "Titanic". 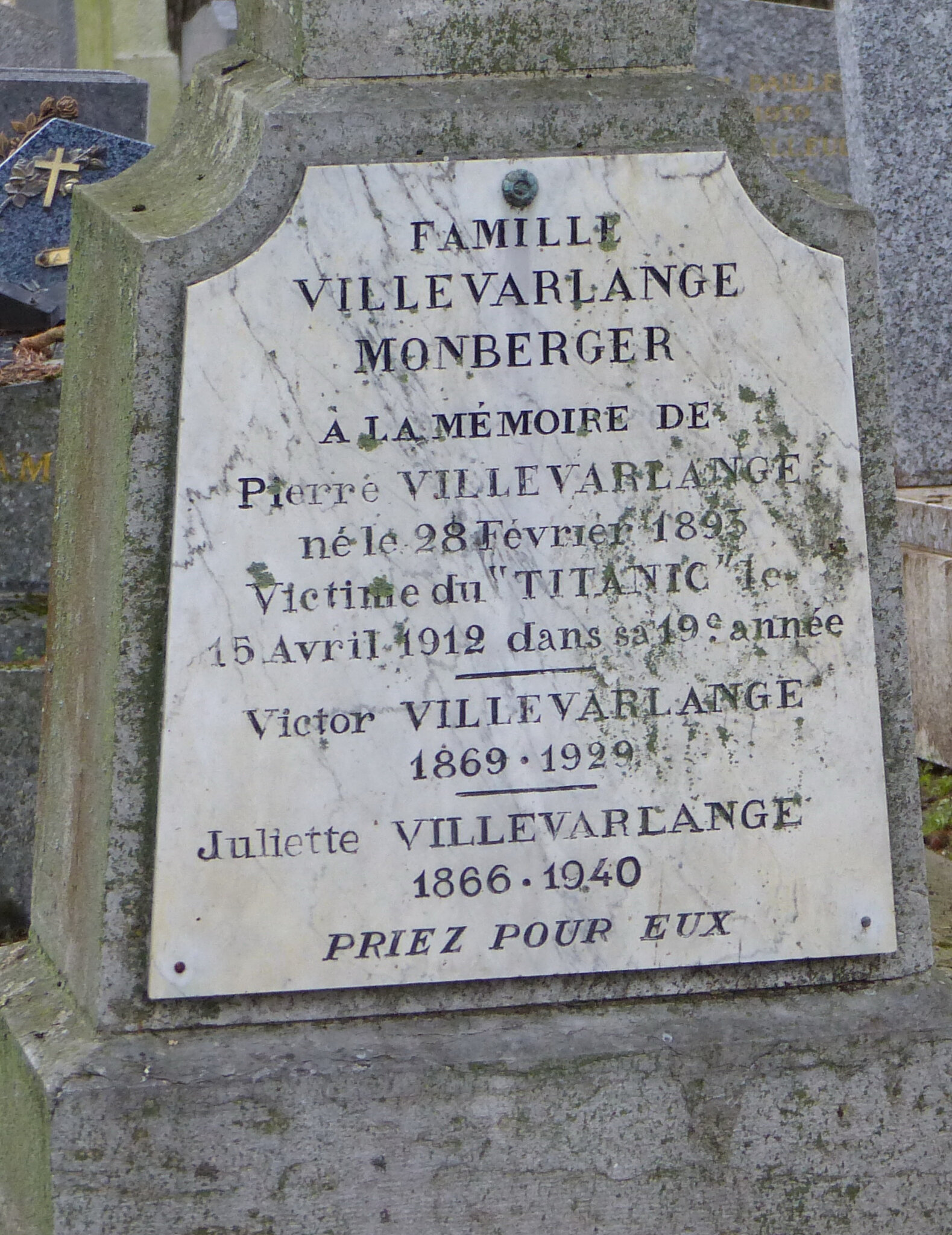 A victim of the Titanic at the cemetery of Blois !! Finally, a tribute rather. Who was he? A passenger? A crew member? And who are Victor and Juliette Villevarlange buried in this family vault?

A few searches later on the net, the tragic story of Pierre Villevarlange unfolds, over the pages.

Pierre Léon Gabriel Villevarlange, his full name, was the only son of Jean Villevarlange, a mégissier, and Juliette Estelle Monberger, a lingère. He was born on February 28, 1893, in Amboise, rue Nationale. His parents had been married since 29 April 1891, also in Amboise, aged twenty-three and twenty-seven at the time of his birth. Jean is a native of Lusignan, in the Vienne. Juliette is a native of Amboise.

Peter will be their only child.

He is employed at the first class restaurant A la carte  aboard the Titanic, assigned to the position of assistant soup cook. Four days before the departure, Pierre sends a postcard to his fiancée in the country, Augusta Oger, whose parents run a shop of mortuary wreaths, in Amboise. The map contains only a few words "I've been in Southampton since Thursday morning. We started working.  We leave Wednesday morning for New York. Good morning to your mom and dad. Your boyfriend kissing you. Pierre Villevarlange, Southampton, 4, Queen's Park Terrace".

The card will reach the young woman three days after the sinking.

Consigned, like all cooks, in his cabin at the time of the shipwreck, Pierre is one of the victims whose body has never been found, probably remaining trapped in the wreckage, at the bottom of the sea. Of the sixty-seven restaurant staff, only three survived: the two cashiers and the receptionist. This is the information I gathered when I read an article in the Journal de La Nouvelle République published in 2018.

Now it's time to check what can be done and take an interest in the occupants of the tomb.

The father, Jean, died on October 23, 1929, in Amboise, at the age of sixty. The next day, his wife took a concession in the cemetery of Blois. What for?

Juliette Estelle Monberger, died on November 18, 1940, still in Amboise, at the age of seventy-four and is buried in the cemetery of Blois, with her husband.

The memory of their son has never left them and his name is engraved on their grave. However, there is a small mistake on the tombstone. Instead of Jean Villevarlange, it is written Victor Villevarlange !! What for?

And why are they buried in Blois?

Before I tackle this question, I would like to identify his girlfriend.

The press article in which I found the main information indicates that the young lady is nineteen to twenty years old, his age and that she did not marry until a long time later. Will this romantic image of the desperate young fiancée stand up to the reality of the acts?

The memories of the old lady who allowed the writing of the article were a bit random. Augusta Oger, Augusta Hélène Marie Oger of her full name, was only thirteen years old when Pierre wrote to her. In what sense to take the words "your boyfriend". Did these words have the value they are given today?

What is certain is that they were neighbors. They all lived on the rue nationale and, at the birth of Augusta, Jean Villevarlange witnessed the declaration in the town hall. Augusta did go and live in Saumur, as indicated in the press article, and she died there on August 5, 1983.

Now that the young friend is identified, I would like to know why the tomb is in Blois, when all are from Amboise and died there, except Pierre of course.

Before tackling genealogical research, covid obliges, I make a small phone call to the curator of the cemetery, to find out where I am going. I learn from him, two things.

The first, sad, is that the tomb has expired and no one has yet renewed the concession. I hope that the town hall will consider this tomb as of historical value, even if no dead titanic is buried there.

The second gave me the name of the person who took care of the concession when Juliette died: Paul Perrin.

Who was Paul Perrin?

I remembered then that Paul Perrin was a witness to the death of Jean Villevarlange. Paul Perrin, forty-four years old, marble entrepreneur in Blois, his nephew. This is my first link between the Villevarlange family and Blois.

I have to dig deeper into this grave story, no pun intended. I go to the cemetery to find out more: who is in the grave, and take pictures again.

The curator kindly answers my questions, and I learn that another grave exists, in which Paul Perrin is located. It is close to that of Villevarlange, very close, and has several names, including that of Monberger. In fact, six people rest in this second tomb: Eudoxie Nesme née Gastien, Angèle Daridan née Nesme, Louise Perrin née Monberger, Jean Perrin, Paul Perrin and Jeanne Daridan wife P. Perrin. There is another plate, lower, soiled by time and mosses. A small summary cleaning is necessary and allows me to finally read, which does not appear in the register of the cemetery: "In memory of Jean Perrin, killed at the enemy on 8 7bre 1914 at the Fère Champenoise at the age of 24 years".

Another grave but same pain, to have lost a child in the prime of life without being able to meditate on his grave.

This time, I do not cut it, I will do a little genealogy and what I discover is rather amazing.

Juliette Estelle Monberger, the mother of my poor "Titanic", had three sisters and two brothers. Except for her sister Victorine, who died in Paris on October 31, 1941, they all died before her, long before her.

The last, Victor, died the same year as her husband, Jean Villevarlange, in 1929. Holds!! A Victor. And they all died in Amboise, except Victor, who died, like Victorine, in Paris.

Juliette therefore remained alone, in Amboise. There are still the nephews.

The famous Paul Perrin, or rather René Paul Jules Perrin, is the son of his sister, Héloïse and Jean Marie François Perrin, the Louise Perrin née Monberger and Jean Perrin of the second grave. However, Héloïse, like her sister Juliette, died in Amboise.

Héloïse died in 1922, at the age of sixty-five. She had only two sons, René Paul Jules and Jean Victor. They both went to war. René Paul will have the "chance" to fall ill very quickly and to be evacuated to Villefranche-sur-Saône. From there, he will be assigned to factory work. Newlywed and father of a little girl, he will be able to continue his family life despite the war, because his wife, Jeanne Daridan, joins him, and it is there that their son, Jean, will be born in 1916. Back in Blois, after the war, they had a little girl.

For his little brother, on the other hand, the fate will be cruel. Corporal Jean Victor Perrin, of the 135th Infantry Regiment, number 1270 of the 1911 class, was killed at the enemy, on September 9, 1914, at the Fère Champenoise, in the Marne.

After Juliet who will not be able to bury her son, it is Héloïse's turn to be deprived of this consolation. Jean Victor is buried in the Fère-Champenoise national necropolis, in an individual tomb, number 1935. The youngest sister Monberger, Victorine, lives in Paris, so Juliette only has her nephew, Paul, who lives in Blois. Besides, when did he arrive in Blois?

If I was going to take a little tour in his life. He began his professional life as a plasterer, and in 1911 he lived in Herbault. It was there that he met his future wife, Jeanne Julie Daridan, whom he married on September 27, 1912.

But, in the meantime, he settled in Blois, ramp of the station. Then he moved to rue du docteur Desfray. His father, Jean Marie François, a native of Côtes-d'Armor, lived with him. He died on February 23, 1925, at the age of seventy. Paul no longer has parents or brothers.

Question for the moment unanswered: at the death of his uncle, Jean Villevarlange, in 1929, did his aunt, Juliette, come to live in Blois, at his home?

This would explain why her husband was buried in Blois and not in Amboise. And if so, when did she go back to live in Amboise? Is it because of the war?

She died there on 18 November 1940 and was buried with her husband in Blois. His nephew did not survive him for very long. Paul died at his home in Blois on March 29, 1944.

And that's where I get interested in his grave. He is buried with his father, and his mother, although she died in Amboise. Jeanne Daridan, his wife, will be buried there in turn, in 1984.

But who are the two women buried with them? No date is mentioned. They are not from Paul's family, so they must be from his wife's family.

And again, the bodies walked on the roads.

Angèle Daridan maiden name Nesme, is the mother of Jeanne Daridan. She was born Jeanne Angèle Eudoxie Nesme and married Léon Armand Daridan in Vendôme, in 1891. She died in Herbault on August 10, 1894, at the age of twenty-six. Her daughter was only two years old, and her father remarried two years later, with Juliette Marie Theveau, in Châteauroux. But he doesn't live very old either. Léon Armand Daridan died on November 17, 1897, in Herbault.

Jeanne was only five years old when she died and had no way in the chapter on the subject. All I know is that Angèle's body is no longer in Herbault, but in Blois, and not Léon's.

As for Angèle Nesme maiden name Gatien, she is the mother of Angèle, Jeanne's grandmother. I don't know when she died. In 1906, she still lived in Herbault, alone. Herbault's registers went to digitization, I could not look for his death. Did she die in Herbault? In Blois? Elsewhere? During the same census, Jeanne also lived in Herbault, but with her paternal grandmother, Anne Blau. What about her? Where is she buried?

The circle has come full circle. Two sisters, each of whom lost a son without being able to bury him, are buried in almost nearby graves, with their husbands. One also has for company, her son, her daughter-in-law, the mother and grandmother of her daughter-in-law. Of these eight people, only three died in Blois.

One thing is certain, in this family, when you move, you take away your dead.